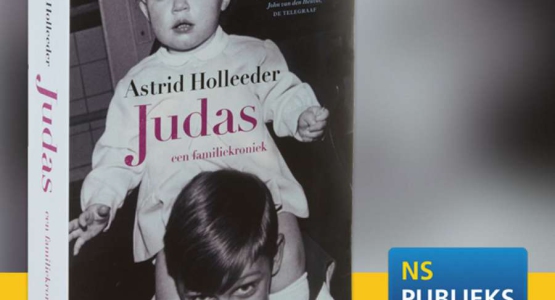 Big news: Judas by Astrid Holleeder is nominated for the Book of the Year Award (NS Publieksprijs) 2017, the biggest public award in The Netherlands. Help Astrid and her intense and moving Judas win this award and have a shot at winning free books for a year! Voting can be done until November 22nd, 2017.

In the TV-show De Wereld Draait Door, on October 25, 2017, the announcement was made that the captivating and moving Judas was nominated for the Book of the Year Award. The award is established by the Foundation for the Collective Propaganda of the Dutch Book (CPNB) and is sponsored by the NS (Dutch Railways). The author of the winning book will receive a prize of  € 7500, plus a sculpture by Jeroen Henneman.

Earlier this month it was announced that Judas will be made into a TV-series in America by Atlas Entertainment and Amblin Television (Steven Spielberg’s production firm). At the same time crime reporter Peter R. de Vries made public that Judas has surpassed his own book The Kidnapping of Alfred Heineken as the bestselling true crime book in the Netherlands. The family saga was also the bestselling book of 2016.